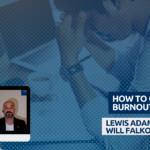 Part of burn out in the tech industry comes from expecting too much from your career.

Expecting one job to bring you status, financial stability, validation, and purpose is a tall order. There are other things in life outside of work that are rewarding too, such as starting a family, and maintaining meaningful personal relationships.

In this video Lewis discusses coping strategies with Will Falkowski. If you’re feeling burnt out then this video is a must watch!

Lewis: I’ve experienced moving to several different cities, and every time you move you don’t know anyone so you got all of this going on and then friends you might not have known for long enough to be able to have those conversations with. I see it a lot here as well with people saying not in places. Not in New York City. Not in San Francisco. Not in Boston. And then move from another state to the city with a great job. But actually one of the things that just don’t account for or think about is the fact they don’t know anyone. It could be a really lonely place. You could be surrounded by great people going out all the time, having great dinners and meals, and living in a house or apartment. But loneliness is real and it’s really difficult. So amongst trying to take all of that weight on your shoulders and then not really having somebody turn to your friends. I mean, I assume they were friends from home not friends in the Netherlands?

Will: Well, I’d say the timeline is in 2011 or 2012, I moved to the Netherlands and I had a burnout in 2018. So I already had a really established group of friends. So I was not alone or anything but the point was it took a long time to slide down that slippery slope and a lot of people don’t know what’s going on. And you might pick up other friends on your way down that you didn’t really want to hang out with. Like I said, with my own article it’s like you, you get submerged in a submersible, you are just smiling maniacally on the way down out the window. And it was although it’s happened to Will, you know, and then you just these are the people who are also low, this low self-esteem or also the part of their lives, which is difficult. And they’re the ones that latch on to you when you go down there. And this is not because we all go up and down, of course, and we like to hang out with people that we can egotistically feel that we’re comfortable with it. Then you start hanging out with new groups of friends and then you become kept there, you know what I mean? Like what’s going on when you have to kind of strip it what I have done recently I became a minimalist and just stripped the whole thing back and just I had to let go of everyone and everything when I was in Berlin, even clothes now I have seven t-shirts, seven nice t-shirts, a jacket. And I went full minimalism I had to strip the whole thing back so I could find who I again learned to be by myself and, you know, just crack on with my career, it is definitely a journey.

Will: Yes, it’s interesting because once I realized I was in a pickle as they say.

Lewis: This means like a mess for any of my American friends.

Will: Yes. So once I learned, I just want to describe a little bit how it feels. I mean, it’s the first thing that goes is your identity. You lose your identity when you’re in burnout and you have no sense of placing yourself in the world that’s gone. There’s a core that just is gone, almost like when mom and dad broke up that’s just gone. You’re susceptible to anything and everything, which gives you attention because you need then because you need love and someone saying it’s going to be alright. And you’re confused and bewildered and everything’s insanity it’s really crazy. Once all that happened, you have all these attachments to things like your apartment and there’s furniture and also the friends that you’ve now obtained and the other guys that now don’t know who you are anymore. They have kind of walked away possibly protecting themselves, I think. I went to Berlin to get a freelance job because, of course, money was becoming a problem at that point. And, you know, it had been a long time since I’d been paid. My proposals were going flat. And I had no energy and I was exhausted.