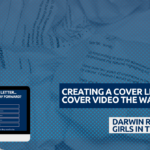 Recruiters know all too well that paper cover letters for can come in the hundreds, even thousands.

Reading through each one can be daunting, take time and is hardly the most enjoyable task.

Gabrielle recently found that a video cover letter was more stimulating and catches more attention through auditory and visual elements. It can have a positive lasting impression – if done correctly. Even though video cover letters are starting to become more common, candidates can still feel slightly uneasy about recording themselves on camera.

This may deter them from applying. But also some businesses that are a bit more ‘old school’ wouldn’t be sold by this approach.

We’ve spoken with Girls In Tech who have shared their own experiences and findings of cover letters or cover videos.

Transcription: Gabriella: So the cover letter is something that again, I think causes a bit of debate. So I have people quite often ask me, do you think a cover letter is important?

Like I said, it, I think if you’re going to do it, there’s a way to do it and it’s important that it is specific.

Again, because a lot of people will just send out a cover letter to every job. And when I read something that starts with Dear Sir/Madam, I know that you just sent that to everybody.

So to me, I just stopped reading there and then it’s not anything that’s specific to me.

So if you’re going to do it, it needs to be specific and definitely tailored.

I would say keep it short, doesn’t again, need to be three pages long.

Something that I recently found a candidate did, which I really appreciated was a cover video and it was really effective.

And that actually got her several interviews off the back of that because it was so personalised. It showed her, it was different. It was something you could just click on and initially was engaging.

Not saying that’s what everyone should be doing. But just like I said, if you’re going to do it, it’s worth doing it properly.

If not, just don’t waste your time, because it’s not going to be worthwhile just to send something out to everyone. T

hat’s a blanket piece of paper. I’ve also put in here to make it unique and memorable. So again, including some things about you, something that’s going to stand out, make you different from everyone else that’s applying, and really make it company specific.

What’s interesting about the job and why you’re applying, basically.

So I think that’s my take on a cover letter. Anyone have any points to add on that one?

Eshan: Well, I think we could talk ages about cover letters, specifically in Switzerland, if people from Switzerland are listening, it’s a bit old school, meaning that we have this way of doing things.

We need to speak about the company, then about ourselves, then about what we can bring to the company. My personal opinion, and that’s really my opinion. I’m not speaking for anyone except for myself. It’s just that, as you said, it needs to be tailored.

But it can take obviously a lot of time to write down a cover letter.

When you’re looking for a job, you will be aiming at ten companies, maybe, I don’t know.

So the most important for me is that you are straight to the point and you actually say why it could be a good fit.

What’s the difference between you and someone else may be, but for me, and again, it’s a personal opinion.

We shouldn’t go through this whole process of speaking and all structured, I think even in an email, it’s fine.

Today we are reading so many cover letters so many CVs that it needs to be straight to the point.

And businesses are not the same as what they used to be.

So I find it just a bit weird that we all keep following the same processes and if it’s just sending a cover letter just for the sake of it, it’s not useful.

You’ll lose time, even the recruiter and the interview was time reading something that is actually not really tailor made or that doesn’t bring anything specific.

But I really think that we should be more straightforward. I would rather have someone writing three lines, that’s really personalised, really you, telling me why you are good for the job then someone following the whole guidelines and the perfect structure.

I mean, yeah, that’s my take, but indeed if you do it, just make sure that it’s more or less tailor made and it brings something to the table.

Gabriella: Yes, I totally agree. I think that’s the most important thing.

Manuela, has put in there that you tried some videos but you’ve got different feedback.