DIVERSITY as a long term value, not a short term project 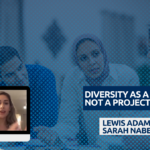 Sarah: Some people have heard this story several times from me, but like, so I won’t repeat it. But when I went into my master’s program in Mechanical and I realised that there was such a disparity between the number of guys and the number of girls in those classes. And I would ask the girls because I actually spoke, because I transitioned into engineering, I wasn’t familiar with the engineering environment and the culture at all, but I did come from math. So I knew what to expect there. But I went into like I went into engineering thinking I didn’t know I didn’t have any expectations. And I asked some of the girls and I said, you know, like, why aren’t there more girls in mechanical engineering? Like, this is cool. Like, I love the material I’m learning. I really enjoy this. Like, it has direct applicability to things that could really change the world. And then the answers that I got were interesting, like, oh, well, you know, girls don’t want to break their nails in the lab. What! It’s a it’s a man job. They don’t want to break their nails in the lab. That’s the silliest thing I’ve ever heard. Or it’s like, oh, they didn’t like the culture. And they went into things that they felt like they can make that little softer. They went into like administrative stuff. And like that to me is also disturbing. But when I think about change, I think about and you mentioned you can’t be what you can’t see. Right. I think that’s a two way street. Right. So some women will be will look at that and they’ll say, yeah, that looks like a discouraging culture. Maybe I don’t want to be a part of it. I’m just going to do what’s easy. Right. So that’s a personal choice. Is it, though?

Lauren: Is that a personal choice? I dunno. I think if I looked at something and said, that’s a horrible culture, I don’t want to work in it, is that my fault as a female or is it the fault of the culture that I’m looking at?

Sarah: So I think it’s both right. So this is where I go. This is my common thread for this whole talk is that it’s both that the educational system needs to focus on considering and and creating an environment that is inclusive. That is that is something that they should focus on. But also for us, it shouldn’t like. I look at that and I’m like, this is a challenge. This is great. You know what I mean? Like, this is something like I if we really want to create the people that eventually generations like that, that future generations will look up to, I need to put myself through, unfortunately, some terrible situations and I can tell you numerous stories where I questioned whether I really wanted to do this, but have felt very strongly in, number one, the work that I do. Number two, the importance of my success on future generations, even though it is challenging and I have a choice for which companies to to join or which companies not to join and which cultures I want to be a part of and which cultures I don’t want to be a part of. So I get to evaluate that. I get to say, hey, you know what? This person who’s leading this company, my values, don’t align with their values. And so I will choose not to join theirs. But look at the other company and I can like I love the culture that we have at SNAP. Like I can definitely say that. And it’s been one of the one of the biggest reasons why I joined and one of the biggest reasons why I will probably stay here, you know, and they’re actively looking at diversity and inclusion as a focus. And many companies right now are looking introspectively and saying, hey, am I providing a culture that is conducive to, you know, to bringing diversity in and creating a culture and they’re holding themselves accountable. Right. And so, again, but a two way street on moving this forward.

Lauren: I think I do think, though, that choice you talk about does come from a place of privilege, because from and this is just what I’m listening to a great podcast, I would recommend that it’s called the Diversity Gap. And then one of the things they say is that white privilege takes away the imagination of action and the options for people of colour. And what it says is that actually you kind of lose sight, that you have a choice because you don’t see it and you don’t see the options ahead of you. You know, so I totally agree that if you’ve got the choice in two companies when one you don’t like and one is a great one, that’s an easy choice. But you will face with only companies where there’s no one in any of these companies like you in an industry, you’re doing your face the difficult choices at every end. So it is absolutely a two way street. It absolutely is, but I do think that choice does come from a place of privilege and I think there are people who aren’t afforded that choice and they’re the ones the companies need to really take the steps to include and kind of have these honest initiatives to launch more and engage more with people.