Robotics Will Transform How Businesses Operate 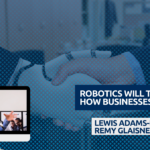 Lewis Adams-Dunstan sat down with Remy Glaisner, Research Director at IDC, a leading research and solutions company for the newest topics and technologies to focus on the topic of robotics and where the future lies for employers and employees.

IDC has more than 1,100 analysts worldwide working in over 110 countries.

Remy talks about artificial intelligence in robotics, why robotics start-ups fail, how robotics are transforming businesses and how to start your career in robotics.

Lewis Adams-Dunstan: So, in terms of the people that might feel, in that case, it could replace them. Is it more a case of them needing to reskill and learn how to work with the robots in that sense?

Remy Glaisner: You have amazing questions! I would say five/ten years ago, people were indeed very worried about well what if robots will replace me. That’s scary. No one wants that right. Even myself. I don’t want a robot to take my job. But what is happening right now and especially in the industrial or semi-industrial space. The big problem is we cannot find the people anymore. If tomorrow you set up a warehouse, a fulfilment center for E-commerce and said, “okay, I’m going to put an ad outside. I’m going to pay double the people. So, they come and work for me.”

I bet you will not be able to hire more than 30% of the people you need. So, you need robots to do the job and where I think the hype is growing right now, is it’s not just robots that will actually replace people, but they will start to do things better than people. So, it’s basically again, it’s augmentation. So, it’s not, I will do business as usual, thanks to robotics is I will transform my business as usual into something that is way better than what I could do before. Thanks to robotics. So, the fear of robots replacing people, it’s legitimate in a way, if you don’t think so much about it. And that’s, by the way if you look at the media, that’s what you hear everywhere.

But the reality of the field is more, we cannot find the people, and we need to have machinery and equipment that are doing better than what humans can do. So, in that sense, is there a need to reskill people? Maybe. But the need to reskill people is not instant. It’s not tomorrow. I don’t need you anymore to move boxes. I need you to, I don’t know, be able to run a program that does XYZ. This is not true. And by the way, when you get robotics, all those robotics providers have been making what we call HMI’s.

Human-Machine Interaction things often look like a tablet so intuitive that my grandma can use that. So, the need to reskill it’s small, the need to adapt to new technology the same way we started to have smartphones in our pockets at first was like, okay, what exactly do I do with that? But the number of apps was growing and were getting simpler and simpler to use. You never had to really think about that. It was natural but it was very gradual.