The Obstacles for Women in Tech 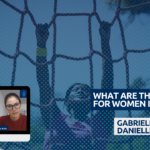 Gabriella Dymott: You mentioned, some mistakes that you’ve made along the way. Is there one particular obstacle that you think you’ve had to

Danielle Ralic: Yes, I think my biggest obstacle, unfortunately, has been my gender, I would say, and I think it needs to be talked about. I know that’s slightly scandalous to say, but it’s tough to be a woman in tech, and I wish it was a lot better, and it is changing. And there’s a lot of awesome allies, like helping push that through. But to be honest, it’s a hidden, silent obstacle all the time. And it took me a while to recognize that and figure out how to start to work around it.

But just so you know, as a few examples, I would present myself, I would say I’m the CEO and CTO, and my background has always been in tech, so I don’t hesitate to help me architect what we’re doing and things like that meeting our tech team, and I would present that with a co-founder who’s a man, and they would ask him the technical questions, even though I made this introduction and we made this a point as co-founders is that I would say it, and then they would reinforce it just to try to make sure there’s no confusion and it would happen repeatedly.

And my co-founder, he’s great. So he would just be like, no, that’s her. But it was little things like that, and no one quite believes you when you say you’re going to do something in tech and we’re trying to build or we are building natural language processing models, and we would get like, oh, that’s too hard. That’s a hard thing to do. And I have a feeling that if I wasn’t a woman sitting in front of him, I don’t know if I’d get that kind of

Or my favorite is with investors and things a lot of personal questions about if you’re married, if you have kids, what your husband thinks about you starting a company, which I don’t think would also happen if I was a man. Of course, none of this can be proven. And that’s where it gets difficult to say a lot of these things. But I felt that as an obstacle. Now that I’ve sort of recognized it, I feel a little bit more empowered to tackle it head-on. But other examples when I first started out, I also didn’t have total confidence in myself, which took a year or two to grow into.

But I had someone come and approach me and say, oh, I really like your idea. Let’s work on this together. I thought, okay, no problem. And we met and at the end of it, he had pulled me aside and said, you’re quite junior. I think I should work on this company in machine language, and I should be the CEO, and it really hit me. One of those, you have a gut reaction. You’re like, wait a second. I put a lot of thought into

I’ve put a lot of work to get this to where this is. And you just want to kind of take over and be CEO, and you sort of got it wrong. It’s machine learning, just a little heads up. It’s one of those points where it’s like, why do people think I’m not capable? I’m like, oh, wait. I think I’m starting to put this together. So it took a lot of awesome friends to wake me up a little bit, but I think that’s one of the obstacles I faced.

I mean, even in my tech career got things like, oh, we hired women in our technology consulting practice because we need a pretty face in front of the client so they don’t get mad if anything goes wrong. And I’ve also heard for recruiting teams that will be working with would pass on resumes with women because we invest in a year or two in them, and then they get married and have kids. And we’ve lost all that time and investment in a woman. So I’ve definitely seen it.

And people have shared that with me, which was a good thing to hear and also terrifying at the same time. And I’ve seen it in other ways. Women on the team, people not wanting women to be on the team because it disrupts the team dynamic, which is the point. So that’s kind of fun or just little comments that women I may have managed to hurt. Those are some of the unfortunate things. I think it is changing a lot, but that’s unfortunately, I think still a reality.

Gabriella Dymott: Yeah, I think sadly, it’s true. I work with a lot of them myself, and I hear it day in, day out. And I think it obviously shows as well by the fact that the majority of kind of people in your position are men. It’s incredibly difficult to find a female or certainly as many females in those kinds of opportunities. And granted, those kinds of roles. So like I said, I think is changing, which is positive, but perhaps not quick enough. It’s obviously taken up until now. And like you say, we’re in 2021, we’re not back in the ’70s, or 80s.