The Visa Process in Germany 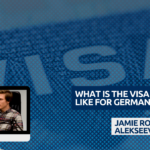 Jamie Rogers: The visa process when I talk to people that are relocating, they’re sometimes a bit nervous about that process. I assume that you would have gone through, like, the blue cards.

Jamie Rogers: Application process. How easy or difficult is that to do?

Roman Alekseev: I did one mistake because the first time I came to the German embassy, I didn’t have all the documents required for this.

Jamie Rogers: What were you missing?

Roman Alekseev: So, it was my fault completely my fault. I really was stressed back then because I didn’t know whether Trivago would shift the date, the starting date with me, whether they sent me a new contract. But again, that was very smooth because I contacted them, explained the situation, and then they just resent me the contract, the new one.

And then the problem was because I was living in St. Petersburg and for applying for a Visa, for a Blue card. There is quite a queue there. So, I think back then you needed to wait one month before your appointment at least. And so, you can understand my frustration, where I was waiting for my appointment. And then I failed and then I would need another one in one month. And this was annoying but then I was careful with all the documents they needed to prepare. I prepared everything needed, maybe even more than needed. And then I was on the safe side. So, I visited the embassy again in one month with my family applying. And then after two, three weeks, I got a visa.

Jamie Rogers: Oh Nice! So that is probably slower now. We just helped move one guy from Ukraine, another guy from Russia, and both of them went through the blue card process. And the guy in Ukraine had to wait three months for his appointment. The guy in Russia had to wait two months. But the guy from Russia was calling the embassy almost every morning and saying, “have you had any cancelations?” And he got a cancellation. So, he’s actually doing it in five or six weeks.