Why are you Struggling to Find Candidates? 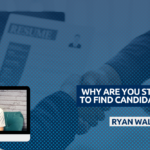 “Why can’t I find the best candidates?”

It seems this question keeps popping up recently, so we’d like to find out why!

To help you understand this fascinating question, Ryan Walker reveals all the hidden answers in this video.

Now put the kettle on, get comfy and be prepared for some insightful advice.

Thank you for joining me again.

I’m back on the video.

Thanks for joining us.

I want to talk about something a little bit different today because I’ve had a letter from one of my clients.

I’ve got it right here.

I’ll read out to you just so you know what it’s all about and I’ll describe it in a minute.

It says, Ryan, I love your videos.

Your good looks and sparkling personality just brighten up my day.

But one thing I really want to know is why can’t I find good candidates in this market right now?

Well, thank you for that very true letter that I didn’t write five minutes ago person I’ll talk about that now.

So basically that is an ongoing thing with a candidate shortage.

And I’m going to say something a bit controversial here, but there’s no such thing as a candidate shortage.

It’s complete BS. It’s basically because you don’t want people to come to your company because you’re not putting the effort out.

A lot of the guys out there, a lot of companies out there just think putting a job spec, copy and paste job spec on a job board thinks it’s going to come.

Loads of candidates are going to rush to them and get five or six or seventeen thousand people to apply.

The old skill phrase if you build it will come it’s not like that anymore.

It’s not candidate shortages it’s society moved on to a different way of doing things.

You figure saying why?

You can’t compare yourself to it.

Because they’ve built a brand, they built something already run about them which is going to make them seem attractive to people who are looking for work.

This is the major issue you’re getting right now.

How can you expect someone to come to you?

You don’t have anything special to entice them over.

So the main thing I’ve basically been seeing once I’ve touched on a minute ago is the job spec.

Do you think you can push yourself out there and copy and paste a job spec on a job board, expect it to happen and going to work that way?

Twelve to sixteen per cent of candidates will come from that job board and that’s only people who are looking.

You’re missing out on literally about the best part of eighty per cent of the candidate market because you can’t be bothered picking up before doing a bit of research.

Put that effort into it, guys.

You never know what could happen.

They just don’t do the business anymore.

So I don’t even think about using job boards anymore.

If you’re using a job board or if you’re looking for a job, maybe go try and be a bit more direct instead of looking at that, you might get a better position because the jobs on there are probably six months old and there’s a reason why they’re six months old.

Not many good jobs.

So the next one is company culture. Is your culture actually decent at your company?

Okay, is that a good thing?

Or we have Friday beers.

Everyone has Friday beers.

We give you bank holidays off oh really thanks very much for that.

Putting a bit of company culture is actually enticing people to come to your company.

What culture did you get?

You got an open plan office, have you got like state of the art computer systems and you got to do the necessary stuff to actually do the job properly, that sort of stuff.

We don’t care about pool tables.

It’s great to take a picture of them. Slap them on LinkedIn to advertise how awesome you are. But what else?

Let’s go dig in deep for stuff. Let’s dig in deep to find out what else you’ve got going on.

Take me out somewhere on Friday instead of having a few jars in the staff room instead.

So have a look at the company culture.

What do you stand for?

Why should that person come, simple?

Diversity is always a big thing as well.

I’m looking at my notes because I bought this stuff down, so I wanted it to be important.

So diversity is a big thing.

Why should it be different to have diversity in your workplace?

Because it is different.

Women all different races and sexes and genders, all that sort of stuff should be included.

It is enticing for people because you’ve got different diverse people working in your company.

You’re going to come up with some new ideas.

Nobody wants to work for a boys club.

Nobody wants that anymore.

You want to have a lot of diversity and about, open your broaden your horizons.

You never know what’s going to happen if you do something like that.

And then again, we talked about a little bit beforehand benefits.

What are you actually giving to your staff that are working there?

Oh yeah, you get happy on a Friday and you’re going to be making work from home.

Can I work from home if I get sick days?

You’re going to pay for my sick days.

Are you flexible I’ve got children.

Can I do that? Are you going to be okay with that?

Or are we still going to be stuck in 1985 where you have to be an office from nine to five, eight to five, twelve to twelve, eight to eight.

Are you going to be flexible, open, broaden your horizons and make sure you’re actually thinking about these things?

Entice towards come in.

You might think, oh, no, this is what we’ve always done.

That’s the worst phrase ever.

Yeah, you’ve always done it like this and look what happens.

Shut yourself and put there, guys, haven’t you?

I know everybody’s probably been waiting for me to actually mention the salary, but I’ve got to say, stop paying crap money for good people, simple as that.

Just sitting there looking at, I want a degree, I want this.

I want someone who’s got five years experience degree, master’s degree, who’s got that sort of experience in this sort of technology.

And you’re only paying them some, like twenty thousand a year.

What the hell is the matter with you?

If you want the world, you’re going to have to pay for the world.

So get your finger out.

Just take cobwebs from your bank account, actually pay your staff what they deserve.

You might get a bit overpriced people, but you’re going to get the good ones coming through.

Because everyone knows the people who are sitting there looking at jobs are not looking for work right now.

They know they’re worth.

They know how much they’re worth and they will not come to you if you pay the bare minimum.

Be open to negotiation, broadening horizons.

I’ve said that a lot this video, but it’s always fun and games.

There you go, guys.

So that’s a little bit of an idea for you, why you’re not getting anyone coming to jobs.

I hope I’ve answered that question to that person that is really real and did write that.

And I didn’t write it myself at all, so it’s a real question.

Honestly, I’m not going to show you the letter, but anyway, on the next episode of Ryan talks rubbish again, alright guys, I hope you enjoyed that one.

I want to start a discussion on here and yeah, I hope we see in the next one, speak to you later.